A Thriller With a Bit of Everything

♦ ♦ ♦ 1/2 It’s been awhile since I’ve listened to a “thriller” type book. I probably would have said that I was pretty indifferent to the story, but then suddenly found myself pulled deeper and deeper into the book. Because I was listening, I’d sit in the parking lot a few extra minutes wherever I was going to get to a spot where I felt like I could turn the car, and thus my book, off. Guess that’s the sign of a good book! For most of the story, you’ve no idea who the bad guys are, or why they are. Then, once it’s clear… hang on to your hat. Hide your kids! 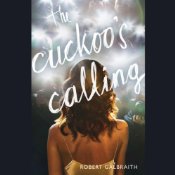 ♥ ♥ ♥ You certainly wouldn’t think that this is a debut novel for  Robert Galbraith, but it is… and it isn’t! It’s really J.K. Rowling writing her first crime novel under this pen name. You’re pulled directly into the life of a one-legged Private Detective whose wrecked private life keeps you almost as interested as the death of the world famous super model he’s investigating. The characters are, well, characters in the most awesome sense of the word. The folks who surrounded the super model were everything from a homeless woman, to the eccentric, to the gorgeous, famous and uber-rich. There’s no keeping yourself from loving the unconventional Cormoran Strike, the detective who is paid and absurd fee to prove that the model’s death was murder, not suicide.

The audio book was well narrated and the pace of the story-line never waned. A definite, good, solid, who-done-it read.